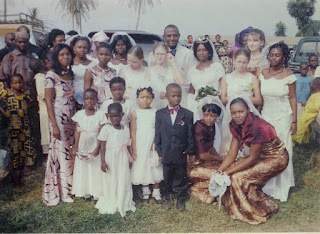 Being prepared for the worst case scenario turned out well for me: I was prepared for a long and torturous day as a bridesmaid for a woman I don’t even know. It was certainly long—almost 12 hours—but having psyched myself up for one day long of awkwardness, I was *almost* able to enjoy myself.

When my alarm went off shortly after 5 in the morning, my sleep-befuddled brain was hard pressed to figure out why there was beeping in the darkness. But in order to be well-fed (in anticipation of eating lunch around 4 p.m.), prettied up, and in the truck, ready to go, at 6:00, I had to rise with the roosters. Actually, it was kind of neat to be awake as the sky lightened. By the time we’d gotten Dan trundled into the truck and were on our way out of the village, it was almost full daylight.

The groom had originally wanted both vehicles to come to Kumba at 7:00 in the morning to pick up the wedding party, then process (that’s a verb, with stress on the second syllable, meaning “to move as a procession”) to 3 Corners Bekondo where the service would be held. He fancied we’d have a rehearsal at the church before the service started at 9:00. We were highly skeptical, but complied, with some minor adjustments.

Mike and Dan put their foot down about the trucks. We took Mike’s, assuring the groom we could cram in a crowd. Lisa was less than impressed to hear she had to drive Dan’s truck to 3 Corners later in the morning, but it was preferable to keeping Joshua, Kenneth and Laura entertained through a needlessly long morning.

Yes, when we three wedding party members arrived on time at the Apostolic Bible School in Kumba at 7 a.m., there was no one around. After just over an hour of waiting, we got together a truckload (none of whom appeared to fellow members of the wedding party), waited longer for the veil and/or the cake, then set off for the pastor’s house in 3 Corners. I was intrigued by the heated discussion on the condition of the roads and the government’s culpability in the matter being carried on by the three Cameroonians in the middle bench. When Dan interjected some North American perspective on “normal”, one of them said, “God made Africans different.” I didn’t say it.

I just had to whip out my pencil and a scrap of paper to take notes at the pastor’s house—the scene was too interesting to forget any detail. The compound was busy but not bustling. There was a hairstyling station (for bridesmaids, it turns out), a person sitting idly behind a treadle sewing machine, an ironing station, a large outdoor cooking area where people were grinding (corn?) and pounding (fufu?); an endless stream of women was drawing buckets from the well. Food was coming and going around the cooking fires in the open air, and people were to-ing and fro-ing in all stages of dolling up for the event. Some were sitting comfortably in the living room, just inside the house, and a rotation was kept up at the dining room table of people eating a breakfast of Kumba bread, omelettes and tea.

Rachel, Jenny and Christy—designated flower girls—arrived as instructed shortly after 8 to be briefed by the pastor’s wife on what they were to do. When we pulled up at 9, no one had yet paid any attention to them or given them any instructions. It was the same for the wedding party members: Mike, Dan and me. In our outfits, we were clearly part of the wedding party, and I would think it was apparent we didn’t have a clue what we were supposed to do, but nobody ever stopped to give us instructions.

The men’s suits were really quite sharp-looking, despite Mike & Dan’s chagrin at having a suit they’ll never wear again. The dark blue, wide-pinstripe suits went with light blue shirts with wide blue and brown pinstripes. I thought the suits looked great—perfect for a January wedding…in Manitoba! How the poor men didn’t melt into the floor over the course of the day, I don’t know. (Here’s Dan’s description of the matter: “During this whole time I was encased in a 3 piece suit with 4 buttons up the front and a very heavy cotton shirt. Once the shirt was soaked, I didn't feel any more sweat, but I felt very dehydrated by the end of the day - my skin was super itchy [from the salt?]”)

My dress, besides the fact it was way too tight, caused me some concern when I first saw the finished product, one week before the wedding. I have never worn that style and I thought it would require a strapless bra—something I don’t have and couldn’t imagine finding here. But, once Titus, the fabulous tailor up in Bamenda, worked it over, I could actually get into the top and I realized I could work with it. Titus stole some cloth from the bottom of the skirt by lowering the very high waistband, which I used to widen the straps, and we made it work, though it was still too tight. Getting in and out of Mike’s jacked up truck was a challenge.

Receiving no instructions, and feeling in the way at the pastor’s compound, we finally went over to the church around 11 where the service was gearing up to start. Seated close to the back of the full church, I caught a glimpse of one of the carefully rationed programs. It said the day would begin at “9 AM Prompt.”

I’ll never complain about a long or late wedding in North America again.

Yes, all this fun going on and the big event hadn’t even started yet. When we heard a commotion outside, the wedding party got out to join our compatriots. The groom and groomsmen piled out of honking cards and the men danced in with a fancy step. The wait for the bridesmaids seemed interminable, and car after car of girls emptied out before I saw anyone dressed like me. There was a junior bride and junior groom, some junior flower girls or something, my girls, some junior bridesmaids in pink swirly satin, bridesmaids in both my gold-brown rose pattern and solid beige, AND a maid of honour. The bridesmaids had added little shawls and a filmy hair covering to the matching jewelry someone had insisted I put on earlier in the day. “We were waiting for you,” they said. Well, you should’a told me! I thought. You obviously knew who I was but I hadn’t a clue who you were. “Do you know how to do the wedding step?” they asked. I told them what I knew and they said it was good enough.

No, no, it wasn’t. They don’t just step-together, step-together; oh no, there’s some side to side, back steps and I don’t know all what! My eyes were glued to the feet of the girl ahead of me, trying to keep from completely flubbing the dance. My relief at reaching the front of the church was short-lived as we now had to really get down with the shoulder-shaking, knee-bending traditional style dancing. The lady ahead of me was the queen of getting down, so she motivated me to do my best to keep from looking like a fool. There was no possible way of preventing me from feeling like a fool, however, no matter what I did.

The bride’s processional involved an intricate step, much exuberant shrieking, being mobbed by other ladies, shooting off fake snow in the air from an aerosol can, rice-throwing, and more dancing. At last, we can start…if only we could find the bride’s parents to give her away.

Giving a slight dig at the very tardy start of the proceedings, the pastor warned he was not to blame if the service went late—he was not about to adjust his remarks to accommodate the ceremony’s late start. This first sermon was about lovers needing to be friends. That was the sermon to the bride and groom. Then we had another sermon for the whole congregation, this one about the four walls of the house: commitment, coitus and I can’t remember the other two. The roof is to be charity. Cameroonians do beat all at finding the most curious ways of expressing things.

Bride and groom were seated together at the front of the congregation on a cloth-draped couch. Once all the vows were said, the couch was turned to face the congregation. The bride’s right hand held the significance at the unveiling but there was no kiss.

The service dragged on and on with money-giving, gift-giving, more dancing and singing. It was 4ish when we left the church for picture-taking. The place was swarming with photographers. I’d be surprised if a single group picture has everyone looking the same direction because there were so many snapping at one time. The bridesmaids, who’d said nothing to me except to give me instructions, were suddenly lining up to have their picture taken with me. I felt like a movie star or something. “I want a picture with the white man!” A few days later the photographers were showing up at the house trying to sell us their photos. The quality of not only the developing but even the set up of the pictures was pretty awful. I could have done as well if not better myself and I’m NOT what I would even call experienced, much less professional. Months later, when I visited 3 Corners market, I’d been wandering around no more than 10 minutes before someone found me and sold me a picture of myself from the wedding!

The upside of this very long day is that the reception is really short. Once the lids come off the food, everyone gets fed and soon after either leaves or hunkers down for a night of revelry. The official stuff is all over at that point, so we beat a hasty retreat to Bekondo with our passel of extremely bored, over-tired children in tow.
Labels: Cameroon

kar0ling said…
If I could just get on the internet with my laptop I would post some pics but though Vinh's router has a port to hook up a second computer, he can't remember his internet password so I'm out of luck. Argh!
June 28, 2008 at 11:23 PM