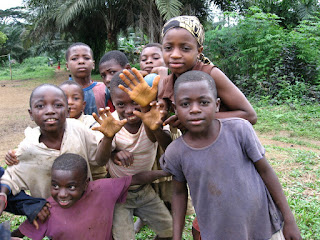 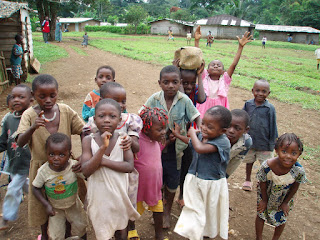 I am thoroughly confused by the Oroko/ Bantu/ Cameroonian/ African (pick your generalization) approach to children.

On the one hand, children are very important. In the village, it is more important for a woman to have proven her fertility than that she be a virgin when she gets married. It’s not at all unusual for high school girls to be pregnant, and thoroughly it’s normal for the bride to already have children on the wedding day. The only couples without children are ones who are physically unable to produce them—there’s no such thing as choosing not to have kids.

So important are children, that adults are identified by their names of their children. Friesens (and everyone else in the village) call their neighbours Sanga Grace, and Nyanga Grace (meaning father of-, mother of Grace—their oldest daughter), rather than Matthias and Judith, or Mr and Mrs Mosongo.

That’s the “children are very important” part. But then there’s, well, everything else—which is where I get confused.

Kids run rampant, all over the village, with very little supervision. Dan jokes, cynically, “Sure, it takes a village to raise a child, because nobody’s taking responsibility for them.” Many kids are half-naked or clothed in rags; their school fees play second fiddle to the prices of drinks to some parents; and there’s been cases where kids were left home alone all day without a bite to eat while mom and dad worked on the farm or visited in another village.

At birth and shortly after, the children are the apple of mama’s eye, carried everywhere strapped to mama’s back. But by one-and-a-half, two years of age, they’re pawned off on big sister to take care of (even if big sister is only a year older) and mama doesn’t seem to pay a whole lot of attention to them—other than yelling to chastise—until they’re at the cusp of adulthood. There doesn’t seem to be a lot of interaction between mother and child to aid in their development.

This is all generalization, of course, and from my limited experience of what I saw from walking around the village and observing people in church. Please don’t take my cynical impressions as “THE WAY THINGS ARE” in every family in every situation.