I acknowledge that our tour was heavily biased in favour of a moderate Palestinian perspective; nevertheless, what I saw and heard in a short period of time was a people in a perpetually frustrated and hopeless existence. I was astonished by the capacity of each person who addressed our group to continue, if not always to forgive, at least to seek ways to live peaceably with their Jewish neighbours; by their persistent absorption of discrimination and violence without retaliation. Thus the shocking statement above came to me over and over as we listened. After a day of stories from several people from different demographics and walks of life, I better understood why one would choose to stand in front of a bulldozer. After hearing such litany of indignities, I itched to put my body in the way of continuing the separation wall.

To come to the land, to hear the stories and share the pain, to offer our pathetic tourist dollars, seems such a feeble, ineffectual response to the pervasive, longstanding injustice. Is there nothing more we can do? Or have they such low standards of us that they ask so little? Unless -- faint hope -- I underestimate my own field by denying the power of words to raise awareness, and hopefully broaden perspectives. If my portion is to write, then I begin here, praying for courage, eloquence, passion, and for gracious words.

Perhaps we've earned that poor opinion with 63 years of indifference to refugees. We're confounded by this devotion to the land (even as we venerate its sites and call it Holy). The Jews' claim divine dispensation, so we shrug and say okay. The Palestinians claim 2,000 years of careful tillage, water husbandry, and harvest; rooting their spirits as solidly in the soil as the ageless olive tree -- and we say can't you just move away?

Home is where we hang our hat, North Americans assert; our green pastures are scented with money. Why toil to build a refugee city you refuse to call home? Why choose an identity-less and impermanent existence generation on end, when you could move some few miles to neighbours who literally speak your language and don't regard your religion as foreign? Why cling to keys without doors in villages without walls, marked only by a living fence of cactus to protect from assault?

Blood boils to mingle with the dust of the land. In a flash of light, or by many small deaths of dignity in hopes of a more peaceful reunion. What is this love that drives despair or denial? 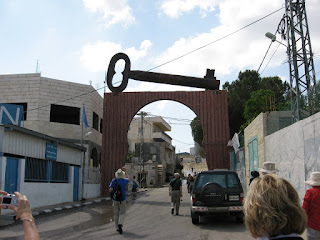 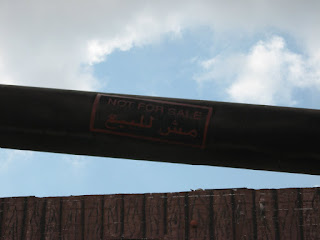