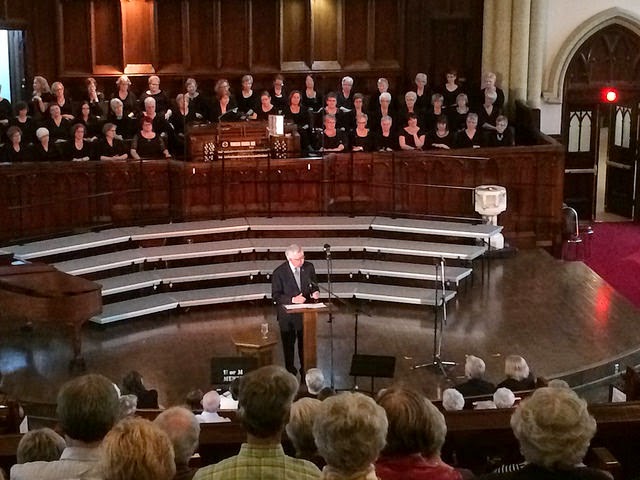 “Clark – is that even Mennonite?!”

It’s a bit disheartening that we’re still saying things like this today when we’ve worked so hard to convey that a Mennonite is someone who subscribes to an Anabaptist perspective on faith, not a person named Penner who likes farmer sausage. But is does make a good story – and the Right Honourable Joe Clark handled it with aplomb.

“I am a Mennonite by aspiration,” he said.

Amid the many definitions of Mennonite, this statement might still be discouraging, but in the context of Mennonite Central Committee’s 50th anniversary gala, it was just right. Especially as the former prime minister remembered how Mennonite churches, with the help of MCC, “did more for the boat people” than anyone else in Canada during the refugee crisis of the late 1970s, early 1980s.

Clark praised several other noteworthy MCC responses to world problems, like its work through the CanadianFoodgrains Bank to not only provide food relief during the Ethiopian famine but to stay long-term, managing distribution and rebuilding. He named MCC reps Ken and Linda Stucky who welcomed dignitaries into their home in East Jerusalem as Canada talked with Palestinian leaders about their right to self-determination.

And he praised MCC – an organization driven by Christian faith (“in the name of Christ” being an imperative part of every iteration of its tagline) – for extending care as readily to people of other faiths and those with no faith. He commended this impulse to work outside our zones of familiarity.
Here was his challenge to us. That we continue. “In a world where examples of conflict are grievous and expanding, we Canadians need to give higher priority to humanitarian dimension of our character,” said Clark. The peace and development emphases that have consistently been MCC’s gift to the world are needed more than ever.

“Positive change can happen – does happen – where people work for the common good.”

This resonated with an exhortation I recently heard from Rabbi Alan Green of Shaarey Zedek: We are living in a new moment in history, he said, when we can actually meet and live alongside people of other races and religions, both in physical proximity and through the world-shrinking capacity of the internet. At this open invitation interfaith celebration of Seder, Green was modelling how this harmony of difference is not merely a co-existence of peaceful tolerance but of curiosity and respect for each other’s beliefs.

This is the kind of world Clark was asking us to see as he invited us to “get on a bus” we’ve never been on before. He was referring to a story he told of taking a bunch of foreign dignitaries up the Banff-Jasper highway by coach when snowstorms cancelled air travel. He’d remarked to the prince of Brunei that it was probably the first time the man had been in a snowstorm. A dignitary from Indonesia leaned over and told Clark, this is the first time His Highness has been on a bus.

“We simply have to learn more about the lives of people who’ve been on a different bus,” said Clark.

Here, he explicitly mentioned practitioners of Islam who are both frustrated by co-religionists who do violence and atrocities in the name of truth faith, and mistrusted by neighbours of other or no faith who fear all expressions of Islam. Yet the Syrian refugee families we welcome now are not so very different than the refugee Mennonites from Russia for whom in large part MCC was started to help.
Our assignment for the next 50 years? “The challenge of a strong reputation is the expectation that you keep on earning it.”

Amen. Mennonite Central Committee and constituents, may we not rest on our laurels, but continue to see new people and places that need intervention; may we “get on different buses,” have new experiences, and never stop learning.

1. Little mention was made of the fact this event was held almost 6 months after the original date due to a last minute cancellation. The original venue had pulled the plug a day before the event when it was discovered that one of the performing groups, an Aboriginal healing drum circle, intended to hold a smudge ceremony on the premises. In a city famous for marginalizing its Aboriginal citizens, MCC Manitoba chose to bear the cost of cancellation rather than sideline these performers, no matter how little their role.

2. Glancing through the program, I felt a twinge of sadness. How can you have a Mennonite event without congregational singing? Clearly, my sentiment was shared because an impromptu hymn, "Be Thou My Vision," was added to the program after the offering. Unfortunately, the venue’s hymnal wasn’t available to all singers, so between potentially faulty memories and multiple versions of familiar verses, we weren’t always singing the same words, but it was gratifying nonetheless so be singing together -- a picture of community.