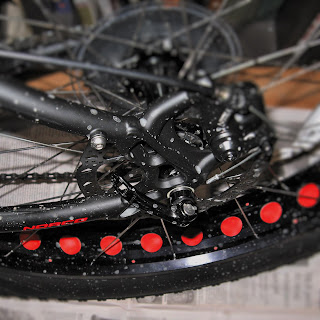 A speaker at a climate change event last weekend said what I've often thought: on the Canadian Prairies, it can be hard to be concerned about global warming because it mostly only means good things for us.

I chuckled ruefully at the irony last year when even the participants spoke positively about the unseasonably warm weather for a Dec. 1 climate protest march.

When climate change means shorter, warmer winters, and longer growing seasons that allow a greater diversity in crops, how can one complain? So we have a few more close calls with twisters. (Actually, the thought of tornadoes terrifies me, so if given a choice, I might just take -30 over terrifying and destrutive columns of wind). We're in no danger of losing winter altogether: who really wants to argue with fewer days below -25?

All this to say that after a gorgeously beautiful, mild fall, snow fell Nov 22 -- the latest recorded snowfall ever -- and even then it is acting like southern Ontario or something.

The fatgirl is on the road now; perhaps not so necessary today since it's still almost too warm for snow to stay but definitely appreciated on Tuesday morning when the 5-hours-old snowfall managed to produce road conditions including all of the following distinct states of H2O: snow, water, ice, slush, ice ridges.

Now, the challenge of expanded cycling infrastructure is the frustration that it doesn’t get cleared. And let me tell you, frozen ridges of slush imprinted with narrow cycle tracks are pretty nasty to ride on. Has anyone ever thought of building up all cycle lanes at least an inch or two above the rest of the road, so they don't become a repository for all the water, slush and debris on the road?

**Update: Mild enough weather persisted until Dec. 6 when it snowed for 3 days straight (okay, exaggeration, but it was a significant quantity of precipitation). My ride home that first night was the most challenging I ever had with the fatgirl (though, being so early in the season, my instincts were not yet honed to the conditions).

Once the snow finished, the temperature plummeted. It was only in the -20s, but it felt ridiculously cold, and forecasts were full of dire “extreme weather” warnings.
Labels: bike