TRC in the Middle East 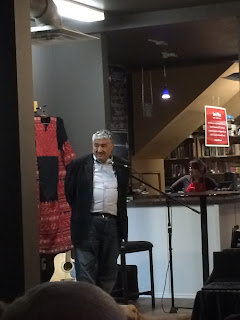 Truth and reconciliation in Palestine.

Jonathan Kuttub, a Palestinian and American and Mennonite lawyer addressed a crowd at Sam’s Place tonight.

“Truth, justice, and peace – in that order,” he quotes, cautioning that if we try to start with peace, before learning the truth and working for justice, we may simply perpetuate injustice for the sake of a false peace that disillusions instead of heals.

We need to stand in solidarity as brothers and sisters.

Truth: evil carries within itself the seeds of its own destruction. History contains many examples of tyrants regimes suddenly collapsing. “The arc of history is long but it bends toward justice,” Kuttub quotes Martin Luther King Jr.

Don’t despair due to today’s or even next week’s or next year’s trials. In the long view, things may get better.

Truth: hope is spiritual. But not ethereal. Kuttub is not optimistic, he said, but he is full of hope. The situation does not look good, but God is acting and so can we.

Reconciliation: “The mere recognition you are living in someone else’s home solves 90% of the problem,” Kuttub says. That is a starting place. Now we can begin to work at living together in equality. First the truth, then the justice.

That is a way forward for settlers and indigenous, be they Jewish settlers or Canadian. Start with humility.

Not a guilty feeling: Kuttub is careful to distinguish guilty feelings – which we just wallow in, feeling angsty about but not otherwise addressing – from true guilt which is a message from God that we have done wrong, need to repent, make restitution and move on.

And this moving on is with equality. “It’s not possible [to live together in peace] if as settlers you want to live as lords.”

Speaking to a crowd of Mennonites, Kuttub challenges his listeners to apply the best ideas of Anabaptism. Everyone can bring food and water, he says. “Mennonites have good ideas – do that. Say, ‘guys, try and think of new models.’”

Separation of church and state is one of the good ideas he cites.

Nonviolence is another. But preach it to both Palestinians and Israelis, he says. Both groups need to put down their weapons and find other ways to make their point and achieve their ends. Jewish militarization for the sake of security has created less of it, not more. The greatest danger to an Israeli, he says, may be the 12-year-old girl with scissors in her pocket. How do you convince her not to want to stab you? All the guns in the world won’t accomplish that.

The challenge of peace may simply be to turn your enemy into a friend.

Nobody wins in the oppression Olympics. However terrible the suffering I have undergone, it does not give me impunity to now oppress others.

Not merely a happy postcard of equal numbers of children playing, but people with genuine differences admitting their own mistakes, recognizing the humanity in others, and working at living together in equality, reconciling but not erasing those differences.

It’s hard work but it is healing.

How will you take the first steps in truth?