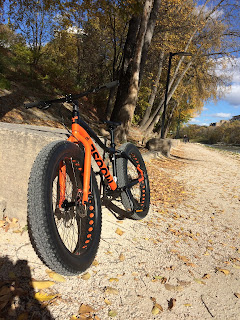 I must admit: she caught my eye as I walked past.

Normally, I maintain it's about function, not form, but it was both her prettiness and her price that drew me back to test drive this one three times and finally take her home despite some dissatisfaction with the fit.

Bullwinkle here replaces my dearly departed Bigfoot fatgirl which grew wings and flew off my third-floor balcony where she was locked.

She went for her first winter ride October 26. It was slippery after a nasty combination of rain and cold temperatures all morning. I expected to think she was overkill by the time I headed home at the end of the day, but the icy road conditions had worsened. Unusually for Manitoba, the bridges were skating rinks, causing multiple car pileups in a city crisscrossed by rivers.

Skyline was okay the next day, but then I was out of province for a week, returning to a winter wonderland in November. Bullwinkle and I will be getting to know each other well from now on (as long as I am willing to lock her up).
Labels: bike