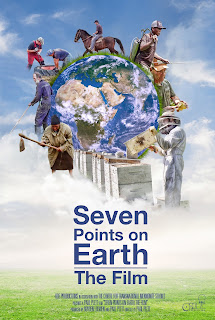 Is there an intrinsic connection between being Mennonite and being a farmer? The question may not have been raised by Ode Production’s documentary, 7 Points on Earth, but I heard an answer. Paul Plett’s film rooted in a multi-year research project of the Centre for Transnational Studies had its world premiere screening at the Winnipeg Reel to Real Film Festival Feb 21, 2018.

Being a Christian is far less about believing the right things – or even doing the rights things/living the right way, as Mennonites are often tempted to think – than simply about trusting God. To take a page from Islam, to be a follower of Christ is about submission.

Farming, said featured subjects Dave Yoder of Iowa and Jeremy Hildebrandt of Manitoba, is also about trust. It’s a risky business, but you keep going out there and doing it, hoping and believing that should it all go to pieces, someone will be there to help you pick them up.

“We don’t pray about the weather,” said Hildebrandt. He and his wife pray about many things, but not for the weather. They leave that in God’s hands. Perhaps with the privileges and advantages of being a North American farmer, it’s just a bit too much micromanaging to try to tell God what to do about the weather as well.

Cut to Zimbabwe: “We pray for rain,” says farmer Ncube, whose corn crop scraggled toward the sun, coaxed by her gentle ministrations in drought-plagued Matoboland.

I think they were saying the same thing, though. Farmers are acutely aware of their dependence on forces outside themselves. The Hildebrandts cultivate gratefulness; for them, not praying for rain is an expression of their humility before God. For Ncube, prayer is her posture of humility before God.

Whether in Canada or Zimbabwe, farmers work hard, then leave the rest to God, trusting he’ll take care of them – and by extension, you and me, blissfully unaware of how precariously dependent we are upon these unrecognized, hardworking risktakers called farmers.

Fries organic farmer Jacob van der Hoek added another angle with his not-quite-right but insightful reflection on the feeding of the 5,000. If everyone shares honestly and fairly, he said, there’s enough for everyone and even a bit left to spare. The land gives to us; we need to give back.

So is there a connection between Mennonites and farming? According to scholar Royden Loewen, statistically, yes. And according to these farmers, I think yes: faith and farming are both activities that require persistent and repetitive action and deep trust.