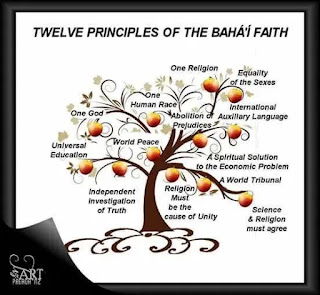 “We don’t really have customs and traditions,” says the keen young woman explaining the Baha’i faith at a multifaith educational open house.

Then, she proceeds to explain Baha'is have 19-day months, have 11 holy days of which 9 are mandatory to abstain from work and school, and they have weekly junior youth groups for ages 11-15.

Why are we so afraid of admitting to having customs? It’s a religious tradition! Of course there are ritual practices and corporate habits.

Is this the influence of oh-so-pious evangelicals who like to say, “It’s not a religion; it’s a relationship”? Is it post-modernism that makes us all want to be unencumbered the the strictures of someone else's philosophy?

What is it that we resist admitting we all do?

Rituals can be deadening, sure, or worse, abusive, but managed well they are shaping in constructive ways. Anyone who has tried to develop skills has learned that to become really good at something, you just need to push through hours of practice, much of which is pure discipline, not fun. But at some point, you realize that these motions that have become unthinking instinct for you are exactly what you need to survive.

Similarly, it is appropriate for a religion to make some demands. We should question a religion that really doesn’t have any customs or traditions. Every athlete needs a coach. Every musician needs a teacher.

But equally, we should be allowed to question the customs and traditions of any religion. Let's not assume rituals are bad for us, but if evidence starts to pile it may be the case, let's not turn a blind eye either.

And then we had installment two of familiar self delusions.

The keen young woman at the Baha'i house explained the 12 principal values of the Baha’i faith, including “equality of the sexes.”

How very egalitarian of them. Tell me more! Oh, your lower levels of leadership/administration (9 local individuals chosen by discernment (no lobbying or coercion), who go to a national gathering where 9 individuals are chosen and so on until you reach the highest level headed by 9 men.


It’s tempting to respond ‘Gotcha!’, but on the other hand, it’s a bit of a relief for the rest of us who claim our religions also teaches this yet we can’t manage to live it out on our boards or staff positions.(Sigh. The pope's recent decision *against* women priests and married priests was deeply disappointing.)

Returning to my opener: we've all got customs and traditions. Let's be willing to recognize and name them so we can also have accountability -- to revise the rituals should they prove unhealthy, and to persevere with the principles even when we haven't perfected them yet.