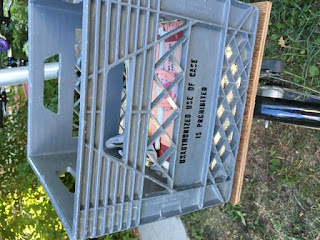 My bike has been parked all over the city: lashed to suburban trees, downtown bus stops and everything in between. It’s generally my policy to take everything off the bike that I want to be there still when I return.

In general, I don’t assume any place is entirely free from the possibility of theft given sufficient opportunity or enticement. But there are places one thinks it’s less likely.

The Canadian Mennonite University campus is one place I wouldn’t expect a non-valuable item would walk away. So, I was surprised to experience bike theft there.

After a season banging over Winnipeg’s potholes tied to the rear rack of my bike, the old plastic milk crate just gave up. Every arm of the plastic lattice-bottom broke, leaving the walls of the crate hanging low over the rack. In spring, I reinforced top and bottom of the crate with scrap plywood, magnifying the aforementioned banging hundredfold. Arriving at work one day after jouncing through the pitted potholed pathways in the park, I discovered my laptop casing had rattled open.

My solution was not only low cost, but low waste. Never one to throw out an item that could have a use, I had carefully saved the spongy Styrofoam wrappers from rarely purchased on-sale Chinese apple-pears. They finally earned their keep by providing the padding inside a pillow I sewed from scrap cloth to cushion my computer as it rides around inside my plywood reinforced milk crate.

On its first major outing, I left said pillow inside my crate as I locked up on CMU’s south campus for a day at the office. Who would want a little, lumpy, misshapen, messily-sewn pillow?

I was shocked to find my pillow missing 8 hours later when I returned for a windy ride home. Why would a thieving theologian take my worthless pillow? I related my indignation to my phone’s dictation function as a mighty gust sped me up Shaftsbury.

Then again, maybe it was just the wind.

I hope apple pears on are sale.