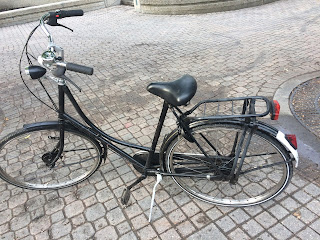 For someone who has an intermittent tendency to apply nicknames to people (ever been confused by references to “Peach”?), it may be odd that my bikes, which play a significant role in my life, don’t get monikers.

But they do get designations.

My 3-season bike is the Skyline (the brand on the frame).

My dearly departed fatbike was the fatgirl. (Her replacement will likely be the fatgirl 2.0.)

And, now, my omafiets has finally arrived.

The Dutch bikes – brought over in a shipping container by a local bike advocate with a grand vision to bring comfortable Dutch-style biking to Winnipeg – were handed out at random (based on numbers handed out at registration) and I managed to completely luck out.

We were all promised rear racks, though a few – unusually – lacked even that. (Recipients of such bikes were promised a front rack, all of which had been disassembled for shipping.) I got not only a nice rear rack, rear wheel lock, front and rear lights appearing to be in decent shape (sans dynamo...but I’ve got one of those, still unconnected to anything, on my Skyline! and, from the same shopping trip in Nederland, I do have spare Dutch style front and rear lights as well), but... here’s the amazing part: not only does she have hand brakes (not to be taken for granted on omafietsen which often have pedal brakes) but she has – almost unheard of for an omafiets – gears! The shifter is broken and it’s a Sturmey Archer internal hub, so I’m not sure how many. Probably two or three.

She’s going to the shop first for a little tune up before I take her out at any length, in part to get her in shape, in part to introduce her to my bike shop before anything goes wrong.

She’s just a smidgen big on me, but it was fietsen-hemel on the way home.

*for those who are wondering, fiets is the Dutch word for bicycle. Fietsen is plural. Oma is grandma. And hemel is heaven.